Small projects are always fun, I think. Things that you finish in one sitting. Like these little zip pouches. 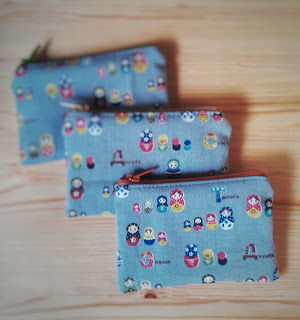 They're small, just right for some credit cards and/or some cash.

I used a variety of fabrics, some that I've had lying around for a long time... The Russian Dolls are from Kokka (bought in 2011). 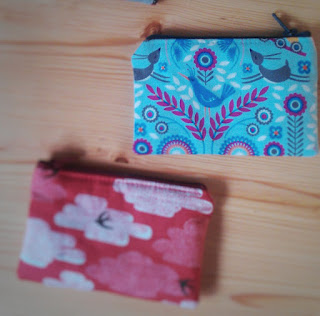 These two are fabric i bought more recently. . The red fabric is Free as a bird by Cloud9 and the blue is Fun and foxes blue by Timeless Treasures. 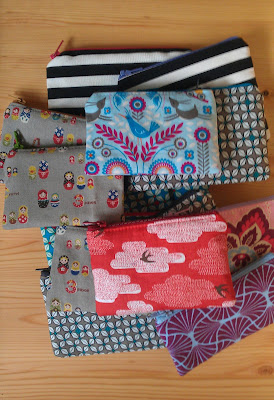 I love seeing this whole pile of zip pouches.
Some other fabrics I used are from Joel Dewberry (for Free Spirit), also back in 2011 I bought a Fat Quarter pack of the Heirloom Amethyst collection, on a whim, but it's really not my style so i never used them. But recently I'm trying to use up my stash... little by little.

The geometric print is by Petit Pan, I used the blue and the grey version, and the black & white stripes are of course Ikea. 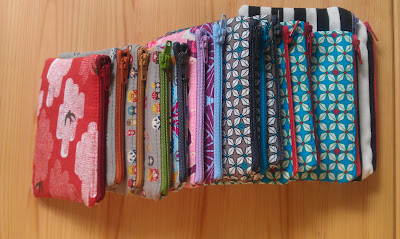 I had a blog a few years ago, but I never really found my "groove" and the blog died a (very) quiet death, ahem.

I'm still reading a lot of blogs though, and I'm still sewing - probably more than back then. And I'd like a place where I can keep my pictures of things I made, and some notes about what patterns I used, what I liked about them, what I'd do differently next time, stuff like that.

That's pretty much why I've decided to give blogging another go.

I'll start with this divided basket (pattern is by Noodlehead). I love this pattern! 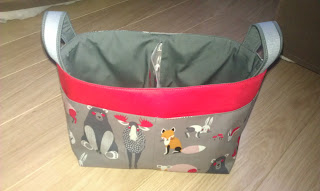 The only thing I changed was that I sewed up the lining and exterior by pinning right sides together and stitching all the way around except near the inner partition - right near that, it wouldn't get under the presser foot easily.
So at both sides of the little partition I had an opening, one of which I could then use for turning everything right sides out. Finally I topstitched all around, closing both openings as I went.

The way the pattern suggests doing it (pressing the top edges of both lining and basket exterior in towards the wrong side, then stitching them together) made me a bit nervous, especially since I was making this as a gift, so I wanted it as perfect as possible. I don't think I would have managed a nice clean finish that way. I'm not so great at ironing/pressing very precisely...

I had (still have, actually...) loads of fabric left and as I said, it was going to be a gift for a dear friend who had her first baby, so I made a very simple diaper clutch (using this tutorial) and a baby blanket. 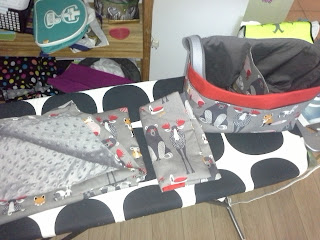 That's an awful picture... I only remembered to quickly grab my phone and take a photo right before I was leaving to visit little cutie Sam and his parents.

For the blanket I used this tutorial.
I had only just enough of the minky dot lying around to make a decent sized blanket. As I was pinning the minky and the cotton together, it kept shifting and pulling but the trick is just to use plenty of pins and it came out fine!
It was my first time ever making a blanket (exactly because I was scared of the shifting and moving fleece combined with non-stretchy cotton) but it won't be my last! Same goes for the divided basket - I already have my fabric cut to make another one!
Gepost door Lies op 04:42 Geen opmerkingen: